Walls are a great for keeping pesky mobs away. In survival mode, building a wall around a village will help you keep the villagers safe. In creative mode, walls can complete an epic castle build. Learn how to build a medieval style wall in Minecraft using stone brick blocks and spruce slabs. Although simple and easy to follow along, this guide requires a decent amount of stone, so I recommend mining a couple stacks of cobblestone and using a stonecutter.

Begin by placing five stone bricks in a row. We will build the front of one side of the wall, then fill in the middle, and finish wish building the other side of the wall.

Next, place stone brick stairs in front of the first row of blocks, leaving one block open in between the middle.

Remove the two stone bricks in between/behind the stairs you just placed. Place a stone brick slab in this space to connect the wall. Then lace two more stone bricks on top of the already-existing stone bricks. Repeat until you have three columns, four blocks high.

Next, place upside-down stone bricks stairs on the highest stone brick blocks. Repeat for each column.

Connect the stone brick blocks in between the three columns by placing another upside-down stone brick stair. Repeat between each column.

Your wall should look like this from on the ground level looking up.

Place stone bricks on top of the upside-down stairs on the ends and the middle.

Now it is time to add the wood behind the stone. For this tutorial, I will be using spruce planks, but jungle planks work well with the medieval theme.

Walk behind what you have built so far for the wall. It should look like this:

Next, add spruce planks to the top left, middle, and right of the highest-placed spruce blocks. This will form a walkway on top of the wall.

Return to the top of this post to follow the instructions to build the other side of the wall. You will need to place the stone brick blocks just as you did for the front on the backside to complete the wall.

If you know how to use World Edit, you download this wall style as a schematic on my Planet Minecraft profile. Just walk four blocks to the right or left when you paste it to continue building the wall.

This build was inspired by one of my favorite Minecraft YouTubers, Spudetti. She uploaded a series of Let’s Build videos on YouTube, and this tutorial was inspired by her Medieval village. Leave a comment below if you have any questions regarding this build. 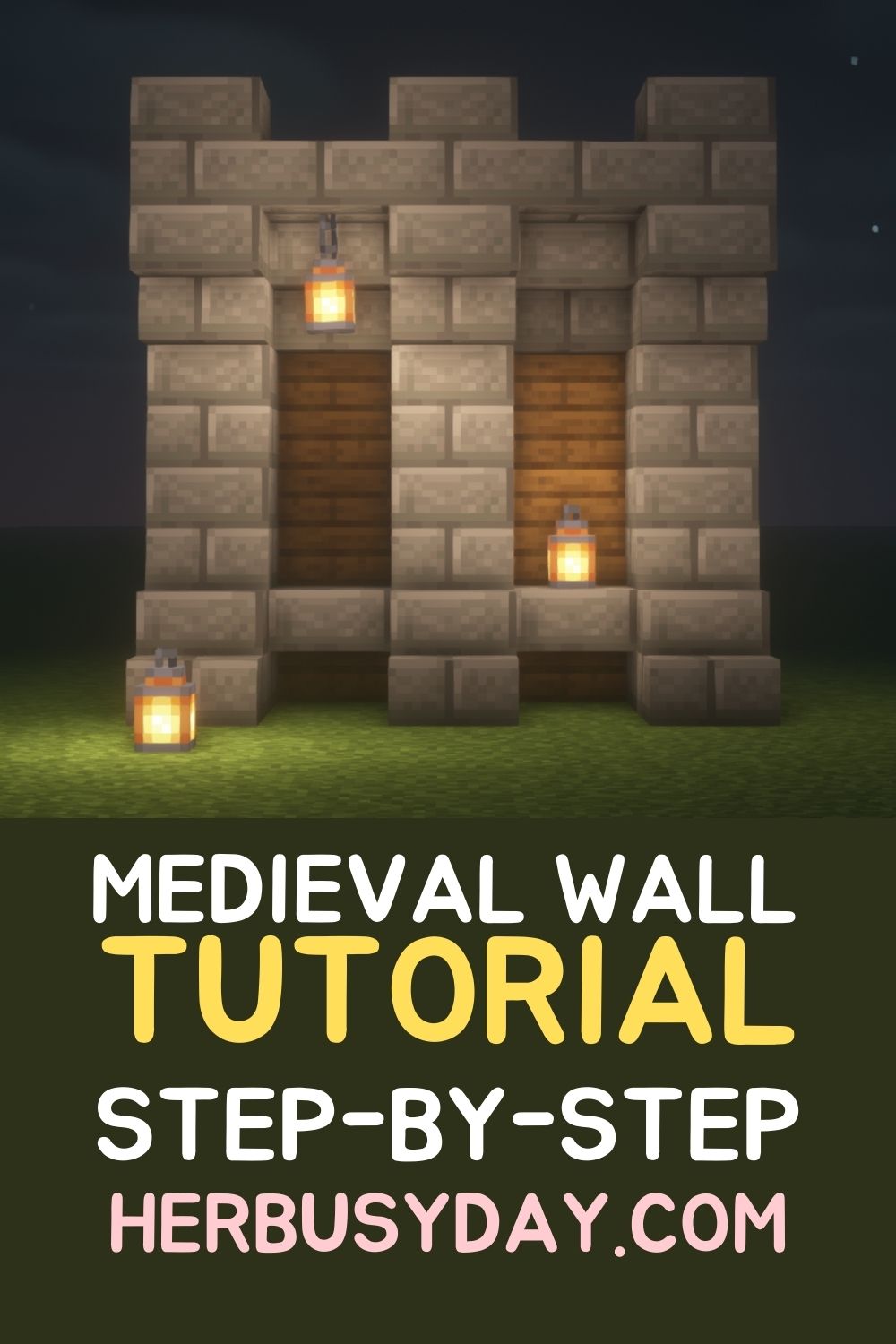 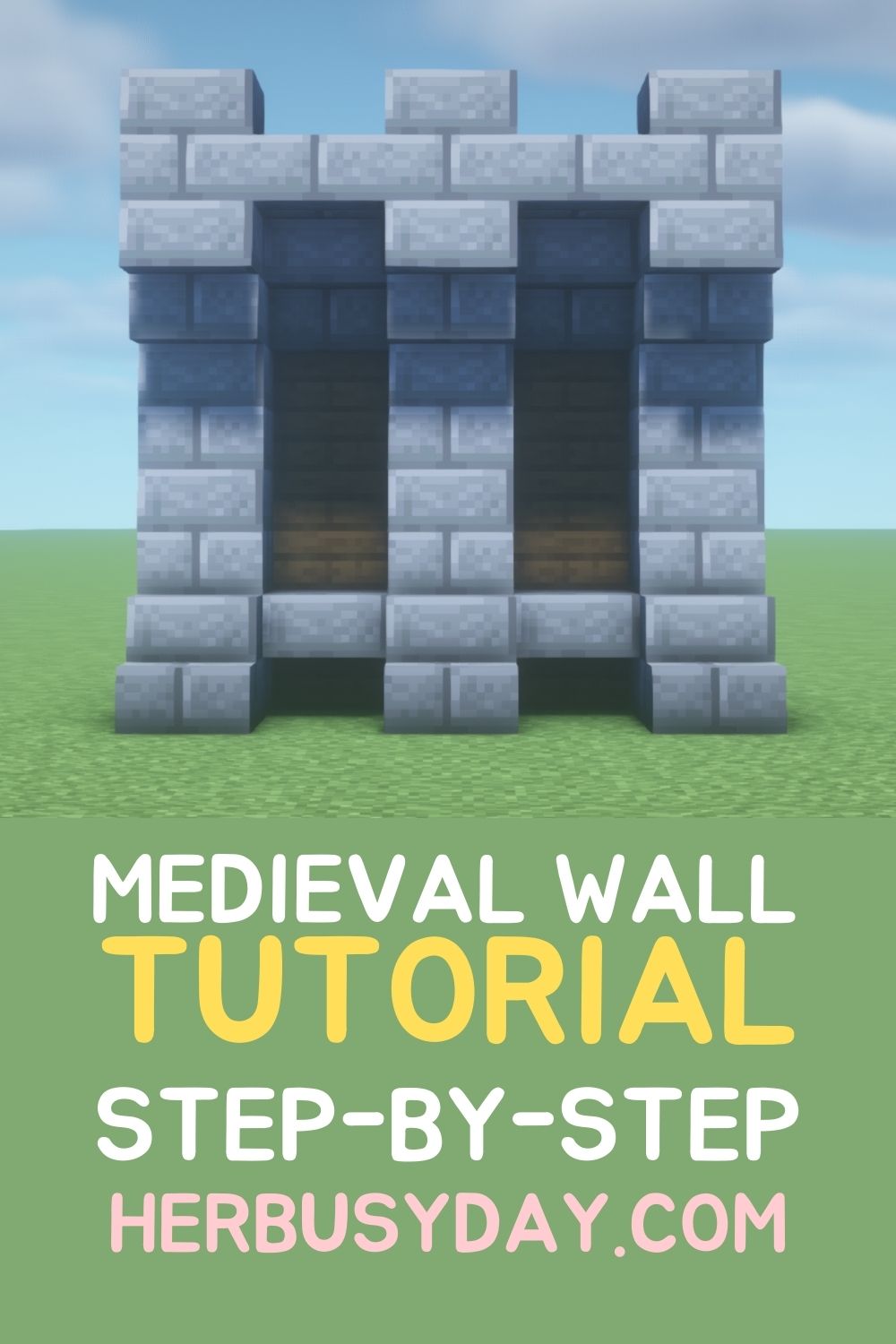 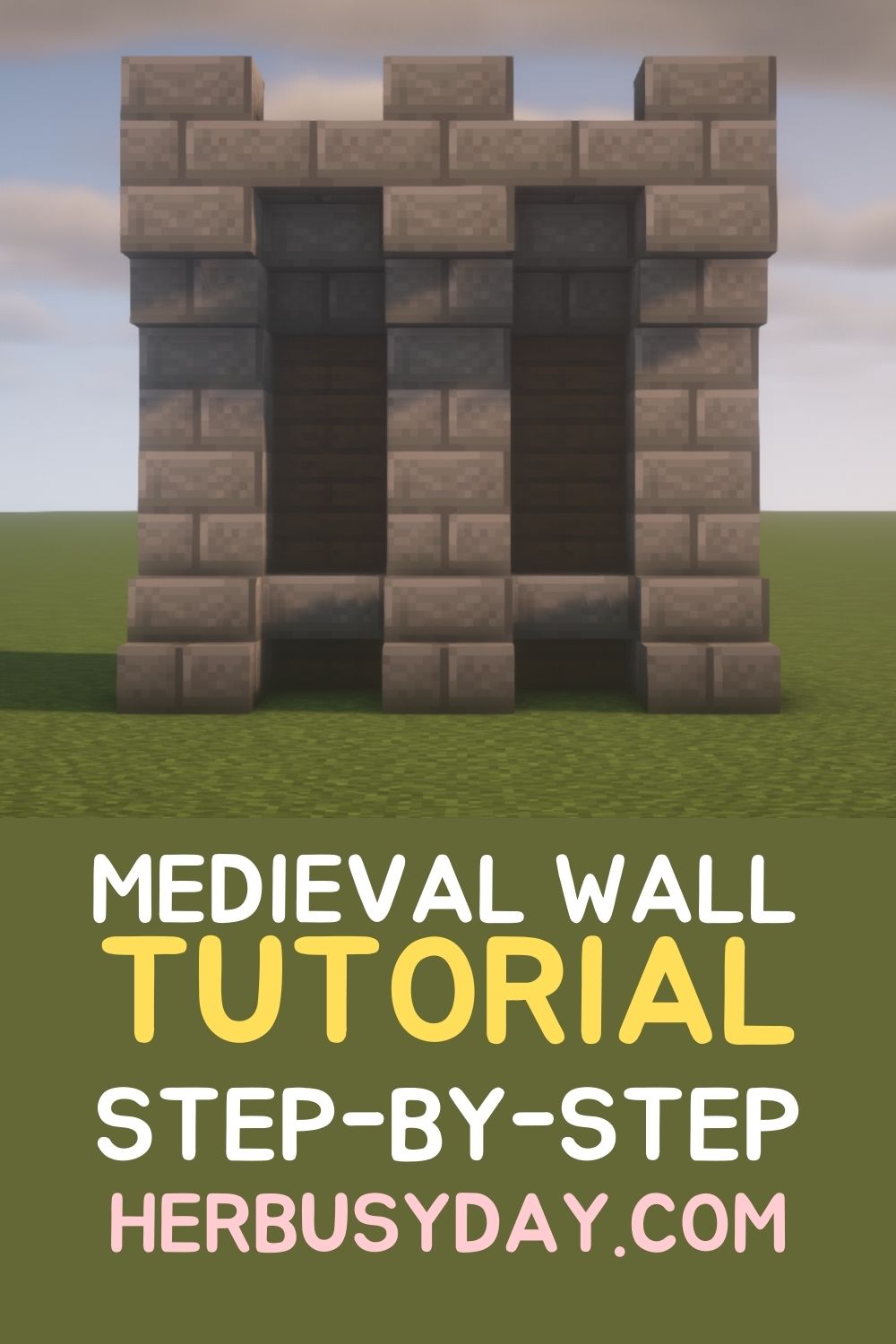 Previous Post: « How To Build a Small Roofed Farm in Minecraft
Next Post: Everything You Need to Know About the Free Update for Animal Crossing New Horizons »

This site uses Akismet to reduce spam. Learn how your comment data is processed.

Hello, hello! Welcome to Her Busy Day. My name is Nadia. As you can probably tell, I like Animal Crossing and Minecraft. This website is a little hobby of mine where I share my knowledge of video games in the form of helpful articles, guides, and freebies. Subscribe to the email list, and you will receive updates when I publish a new post!

Get notified when new posts are published. Please be assured that we protect your privacy and will not share this information.